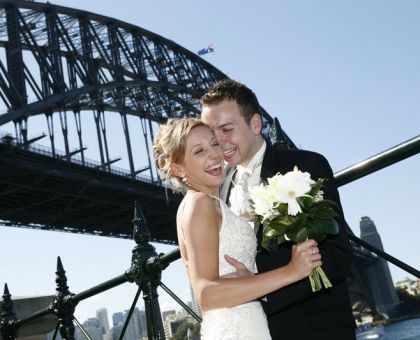 On the 3rd June 2008, the first official WeddingClimb took place at the summit of the world famous Sydney Harbour Bridge.

Stephen Tierney and Claire Tullan from the UK became the first couple to officially tie the knot on The Sun Deck at the summit of the Bridge.

Dressed in BridgeClimb’s Bridge Suits, Stephen, 27 and Claire, 28 ascended to the top of Sydney’s famous structure where they exchanged vows and weddings rings, 134 metres above Sydney’s harbour. BridgeClimb developed a tailored safety device to enable to couple to exchange rings safely.

Stephen and Claire flew from Glasgow, Scotland to make their dream of being married on Australia’s icon a reality.

“I have always dreamt of having my wedding on the Sydney Harbour Bridge. The views from the summit of the bridge were unforgettable,” said Claire.

The groom’s sister, her boyfriend, and the groom’s cousin flew to Sydney to surprise the couple.

“I couldn’t believe my sister, Maggie, was standing on the top of the bridge with her boyfriend and my cousin, Elenor.

Sharing this occasion with them has made today even more memorable for Claire and I,” said Stephen.

Stephen and Claire enjoyed their honeymoon in Australia before returning to Scotland where they celebrated their union with family and friends.

Now you can enjoy the ultimate wedding experience high above Sydney Harbour with spectacular views of Sydney and beyond.

This is a once in a lifetime opportunity for couples who wish to take their special day to the ultimate high!

Traversing the suspension arch, you will climb through the Bridge and be able to touch the raw steel and rivets and experience more visual evidence of Sydney Harbour Bridge history. You will climb stairs and catwalks never previously opened to the public winding your way through a tangle of hatchways and steel girders suspended above the traffic. You will see the location where the arch was joined for the first time making Sydney Harbour Bridge History, and access walkways used exclusively by maintenance teams until 2006. At the top you will climb between the arches to the summit, 134 metres above the water, and see all of Sydney laid out before you. Along the way, a Climb Leader will share the Bridge's rich history, leaving you in awe of this incredible feat of engineering.

No other Sydney wedding location can give you this feeling of standing at the top of the world, with the Harbour spread before you. 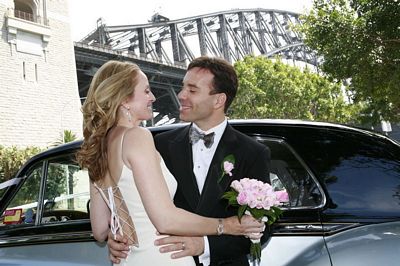 What does The Sydney WeddingClimb include?

All Climbers will receive a complimentary group photograph taken at the summit of the Bridge and a Commemorative Climber Certificate. 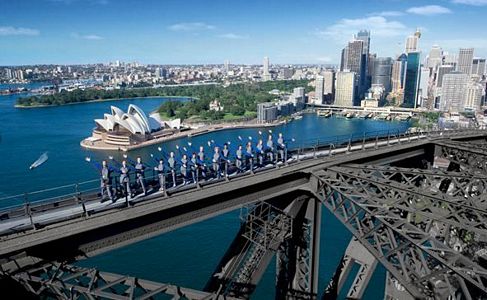 Things to consider for The WeddingClimb:

BridgeClimb operates in all weather conditions with the exception of electrical storms.

All Climbers must take a blood-alcohol breathalyser test and record under 0.05% before being permitted to Climb.

All Climbers must pass through a metal detector. No loose items are allowed on the Bridge, lockers will be provided. Wedding bands are permitted on Wedding Climbs and will be secured by a BridgeClimb device.

All Climbers must sign a declaration that confirms they are fit to climb and accept BridgeClimb's terms of trade.

If anyone in your group is pregnant, expectant mothers with normal pregnancies can climb up to the end of their second trimesters (up to 24 weeks) providing they produce a signed Certificate of Fitness from their medical practitioner.

Children who are over 8 years old and 1.2 metres tall may climb. Children aged 8 to 15 years must be accompanied by an adult.

All Wedding Climbers, including the Wedding Couple, are required to wear BridgeSuits and all standard BridgeClimb safety equipment for the duration of their Climb experience.

Prior to your Climb, all Climbers should consider any health and medical issues that may impact their ability to Climb safely.

Happy Anniversary to Vanessa and Kyle who were married one year ago today on the summit of the Sydney Harbour Bridge. 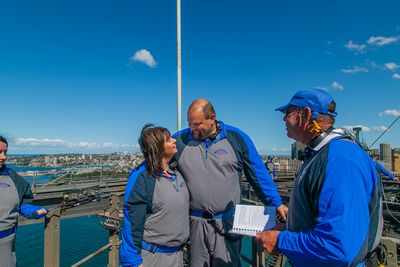 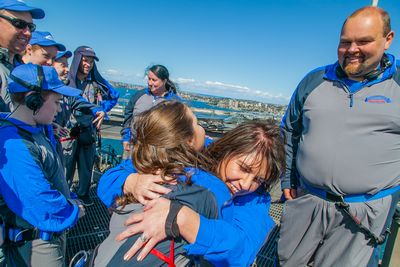 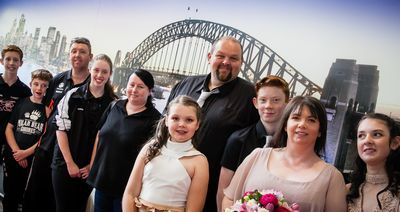 How should you prepare for your Climb?

Ensure that you have eaten before your Climb and you’re well-hydrated – the experience can last up to 4 hours. Wear comfortable clothing and enclosed rubber-soled shoes such as running, sport or hiking shoes and don’t forget your sunglasses.

To Sydneysiders, the Bridge is more than an iconic landmark.

Opened in 1932, the Sydney Harbour Bridge is a world-renowned symbol of Australia. The historic tale of construction still fascinates locals and people from all over the world.

1815 is the earliest known date for proposals to build a bridge between the northern and southern shores of Sydney Harbour. It wasn’t until after the First World War that the idea was taken more seriously, when Dr JJC Bradfield presented his design to the New South Wales Government.

After inviting worldwide tenders for the construction, the contract to build the Sydney Harbour Bridge was officially awarded to English company Dorman Long and Co Pty. Ltd.

The construction began with the turning of the first sod on 28 July 1923, employing 1,400 workers and taking over eight years to build at a cost of more than 10 million pounds. Approximately six million hand driven rivets and 52,800 tonnes of steel were used to complete the construction, and 272,000 litres of paint were required to give the Bridge its initial three coats ahead of the official opening day on 19 March, 1932.

Positioned across Sydney’s breathtaking natural harbour, the Bridge has become one of the most photographed features of our beautiful city and the ultimate destination to say “I Do”.